First, I'm sorry for the unusually long gap between posts, but paying work has taken priority the last couple of weeks...
Secondly, I wanted to throw a change up in here just for fun. I know I have at least a few regular visitors from the U.K., and thinking about that inspired me to dig up something a little different for this post...so, a bit of personal history:
My mother's family emigrated from England to the Boston, Mass. area early last century and I kind of promised myself that if I was ever "in the neighborhood", I would try to find the small town of Ilfracombe, in southwest England, that they had left behind. My wife and I were staying near Bath a few years ago, having taken the train from London, and had already decided to rent a car and drive down to Devon and stay in the town for a few days, since we wanted to see that area anyway. 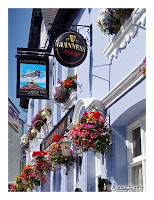 I already knew, from an old (circa 1930) tourism catalog that somehow got left over from my grandparent's possessions and found it's way to me, that Ilfracombe is a resort area, but we were pleasantly surprised at what a beautiful little place it is, sitting right on the north coast surrounded by rolling green hills and rocky cliffs. Hiking on the cliff tops and looking out over the ocean, it felt remarkably like some of the coastal areas I now enjoy in California, so maybe it was in my blood that I would end up here on the west coast, close to the pacific and it's many rocky cliffs. It was surely kind of odd, walking around this little village, halfway around the world from where I live now, realizing that my grandfather and his family had lived a good portion of their lives among these same streets and houses... and that they probably didn't look very much different then than they do today. After returning home, I contacted a nice lady from the Ilfracombe town museum and she helped me trace this branch of my family back several generations, so I definitely have long history here, but I got to the point where it was going to take some serious investigation to go back any further. Hopefully, I will return some day and be better prepared to do some efficient research, since they have many years of historical records at the museum.
From Boston, my grandfather eventually found his way to northern New Hampshire, where my mother and later myself, was born, while my great grandparents lived out their lives in the Cambridge/Arlington area, just west of Boston.
I really like this shot of the town harbour, taken at twilight. It has a special significance for me and people seem to like it even before knowing it's story; for some reason, many ask me if it was taken in Denmark:)

Oh yes, it does look slightly Danish! These are lovely photos and they make me really keen to visit that area of the world. I think it is 20 years this month since I was in Devon and Cornwall. (I sound so old! I was only 16 at the time!)

Tracing back your history is exciting. You just gave me an idea for a post - but I'd have to do some serious travelling first.

I really like the colorful harbor. The boats are very vivid in detail.

Mark, you also look to be ready to work fro tourism offices :)

Nice story and also beautiful images. The harbour one is really pretty (not sure that's the right word) and has it's own value even without your personnal history.

The images are beautiful! How exciting it is to visit a place where one's ancestors are from. I wonder what they'd think?

A beautiful shot and a lovely story. If seems we share quite a bit of the same geographical and cultural history.

Originating in Liverpool and Glasgow in the late 1800's, my family migrated to Boston, then NH, now Oregon.

It makes for quite an interesting mix. I love it here, but still often find myself longing for the culture and the old architecture of my Bostonian home. :)

Mark, your post is worth the wait and never mind the long pose between postings. Quality is better than quantity.

Your facade here is placed with diagonal lines. A good choice of composition again. There is plenty of story in this image.

Hi Mark...great image of the harbour. A lot of these sort of areas are tourist resorts but quite "low key". I went out on a boat trip from Ilfracombe on a family holiday, I remember it well. Interesting family history, it usually gets difficult prior to 1838, when the BMD register started. Both Devon and Cornwall are lovely places to visit.

Mark what a lovely shot of the harbour. One of the sad things about the UK is they have such great beaches and resort areas but just don't get (consistently) good weather.

I agree w/ Roentarre, worth the wait and never mind the time in between posts.

I thought about John Wright:
http://johnwrightart.blogspot.com/
when I saw this photo...he's from the UK and is a wonderful water colorist...this beautiful photo reminds me of his paintings.

My cousin lives in Arlington...beautiful area...love the ancestry you have laid out for us and the photo really does speak volumes...beautiful, crisp...lovely!

Lovely sharp images Mark I can almost feel the heat from the sun!

Good job you said "visitors from the U.K" and not visitors from England wee Scots are a wee bit touchy about that ;)

Strangely we have traced our family back to 1791 and are all Scots all the way down the line. Apart from my grandfather born to Scottish parents but he was born in Canada.

What beautiful photos, Mark, and such a nice story. That's great that you were able to walk on the streets of your ancestors.

These quaint villages are so romantic and being right on the water makes them more so.

Lovely photograph, Mark complete with an interesting background behind it. i can see how some feel it could be from Denmark with the colorful row houses and such.
Inspiring work.

love your work...and this is a great shot, it really gives off a true british feel to it...keep up the great work
ian.

Emm: Of all people, I thought you would have been around this area more recently.. maybe time for another road trip:)?

Joanne: Thank you. As usual, late afternoon/early evening brings out the best color and this was no exception. We were so lucky to have beautiful weather the whole time.

Patrick; Thanks a lot, but they haven't called yet.. and I don't like bright and sunny scenes as a rule, either:)

Michelle: I don't think my grandfather ever had any desire to go back here, but he probably would have thought it cool that I was intereted enough to go and search it out for myself.

Michele (Cameron Drew): I like Boston too, but don't really miss it much compared to the west coast. My dad and other family still live back there, so I can visit anytime.

James: thank you.. that's what I keep telling myself.. "quality before quantity":)

Chrissy.. that's exactly right. Early 1800's was about as far back as I got before giving up.

TT: We had perfect California type weather the whole time there.. I believe it's typically a little better climate in this area than the usual stereotype of "English weather", but I don't have enough experience to know for sure.. maybe we were just lucky to hit it at the right time.

Amy: Thank you as always.. I know John's work well and follow his blog on a regular basis. He is one of my favorites. I lived in Arlington myself for 5 years,.. it was my last stop in Boston before moving out here over 20 years ago. My favorite of all the areas around the city that I lived in.

Holly; thanks as always.

Gary: Thank you for your comment.. I usually like to take a look at where new visitors are coming from, so I found your blog.. very nice work. It's always good to hear for other serious photographers. I'll put you on my reading list.

Ian: Glad you stopped by also. London is my favorite city, so I'll have keep an eye on your blog. Appreciate the comment..

I just came back from Ireland, and your photos look very familiar. I'm still a little stunned how big everything in the US is - everything! It's so picturesque in the EU!

Deb!.. Welcome back. I'm jealous.. I want to get to Ireland really bad, but don't know when it's going to happen. So many places to visit and so little time (and money). Hope you had a great time.. post some photos!
Almost anywhere is going to look small after you live in the western U.S.:)

Ilfracombe was the destination of a pleasure steamer from Swansea in South Wales. I have been there often, the last time in 1978 when I cycled to a writing course in Mid-Devon. I could see the town from my bedroom window by telescope.
I seem to remember Peter Sellars was born there.

Thanks for sharing nice.

Love the waterfront photo of the boats with the buildings in the BG, Mark. I will be in Maine this fall, and am looking to find some fishing village shots similar to this.