A Change of Scene

After almost two weeks of concentrating on the ocean, feels like a good time to go in the opposite direction. I am fascinated with slot canyons; they are so awesome to hike through and make great photographic subjects at the same time. Can't ask for more than that. This one is known as Willis Creek and is somewhere out in the middle of nowhere in the Grand Staircase region of southern Utah, a bit east of Bryce Canyon. After 15 miles or so down a dirt road, you park by a little stream and actually follow the stream down into the canyon as the walls grow around you, like Alice down the rabbit hole. There are almost 2 miles of ever changing light and shapes as you follow on down; the stream eventually dies out, at least when I was there. These 2 backpackers are the only other people I saw during a whole afternoon of walking and shooting; they passed by as I was already set up, so I left them in the scene to give a sense of the scale.
Posted by Mark Alan Meader at 6:13 PM 25 comments:

A Nice Day by the Ocean (part five)

Sunset and beyond. Bringing this one day sequence to an end, I was debating if I should include this top one or not since it is pretty much the same time frame as the last post and fairly similar, but I guess it's different enough to be worth a look... and the sky is rather nice. The second shot was literally an afterthought; walking back to my car to head home, I still had my camera and tripod over my shoulder and for kicks decided to stop and shoot this last view which is well after sunset. Reviewing my "digital negatives", it was a really dark exposure and I had no intent to even process it, but with some spare time the other day I started to play with it and was fairly happy in the end, if only because it puts the whole setting for the previous shots in some perspective and adds just a touch of civilization at the end. Looking north toward the settled part of La Jolla Cove... you can see some high rise condos and the lifeguard station off there in the distance.
I was also able to work on some texture studies/abstracts of the rock patterns in between these other shots, but will save those for another day and end this series here... time to move on. All in all a very productive afternoon. Wish they were all so. 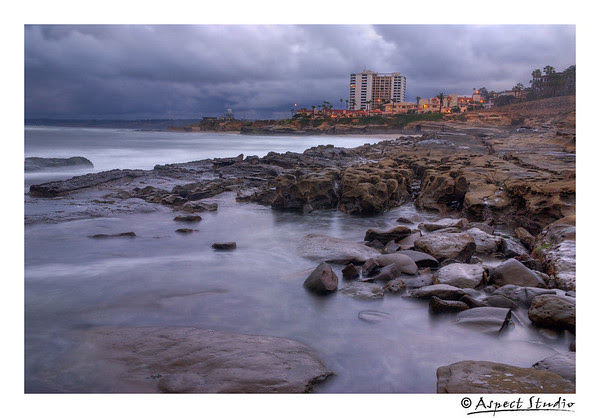 A Nice Day by the Ocean (part four)

Getting to the fun part now - almost sunset, but a little darker than it would normally be due to the heavy cloud cover.  No complaints though, since a dark, ominous sky is often the ideal for this kind of scene.  If any, my gripe would be that the weather is too nice around here most of the time. The slight crack right on the horizon allowing some color to come through really makes it for me, whereas if it was all dark gray it wouldn't have been nearly as interesting. I guess I could have chosen an even longer exposure and completely softened out the ocean, but kind of like seeing a little shape left in the waves.
I've shot this area late in the day many times, but there are so many possible variables with the tide, waves, weather, etc., that it always ends up looking completely different. 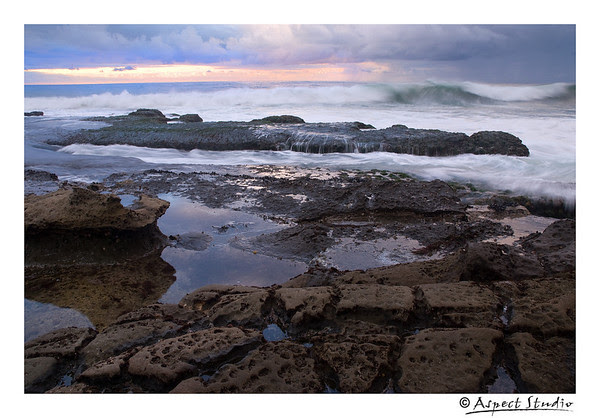 A Nice Day by the Ocean (part three) Continuing on another 30 minutes or so, what I have here is essentially two versions of the same subject in two different kinds of light. The first is very soft and low contrast while the light was being filtered through the clouds, and the second has a lot more definition as the sun managed to peak out near the horizon and create a really nice side-lighting effect and also give that beautiful russet color typical of the late afternoon. The gulls were cooperative subjects, posing nicely while I was shooting away with the light changing almost moment by moment. Still haven't decided which of these I prefer; I'll be interested in which gets the better reaction. To me, the second, besides the nice light, has more depth although I like the atmosphere of the first also.
I actually have several more decent variations on this one which I won't bore you with; eventually I'll pick the one I feel works best overall. 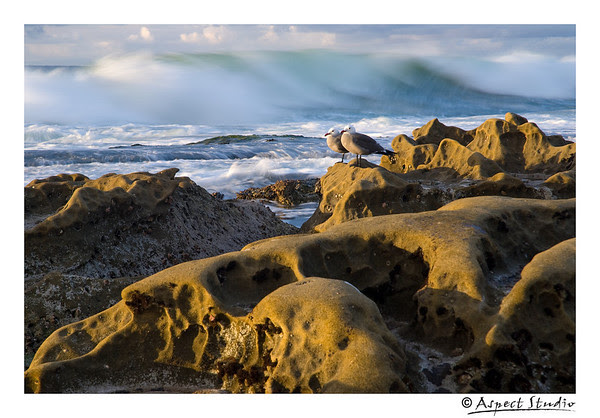 A Nice Day by the Ocean (part two)

Just one for today, since this image kind of stands alone in my time sequence. About 45 minutes later in the day than the two in my previous post, the sun is low enough to give the sky a bit of color now, when not covered by the clouds. The soft light gives the blues and yellows a pleasing pastel-like look. You can see from the water action that the exposure is getting longer, too. When reviewing the thumbnail images right out of the camera, as shot, I almost passed on this one as it looked kind of flat and uninteresting due to the low contrast, but with just some quick correction to the levels and a touch of saturation, it became one of my favorites of the set.
Posted by Mark Alan Meader at 12:34 PM 7 comments:

A Nice Day by the Ocean (part one) 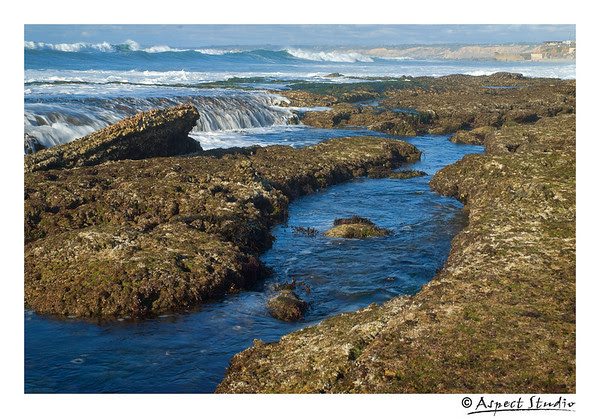 It came to me that even though I live just a few minutes from the coast, I haven't yet posted any seascapes here, mostly because I haven't done any recently and haven't been thinking about it much. So, a Sunday afternoon with nothing else to do was the excuse I needed to head down to my favorite spot south of La Jolla Cove, especially since we were between large storms here in southern California and I hoped that some good stuff might be happening with the waves and the sky (I used to fly sailplanes for fun and you get pretty good at judging the weather when you're into soaring). Turned out that I was right... some pretty impressive breakers were riding in and the clouds were doing nice things to the light. Also, it was low tide when I got there, so was able to get out on the rocks and use them for my foreground, which is essential if you can manage it without getting soaked.
Shooting here is a much more dynamic situation than the usual landscape where everything is more or less static. The waves are changing second by second, along with the light, there are gulls flying in and out of the frame and the water flowing over the rocks actually varies the composition constantly without even moving. You have to be careful not to get dumped on by the occasional larger-than-expected wave, also.
The whole afternoon, I don't think I wandered more than 200 yards in any direction but was able to come up with at least a dozen distinct and different images. I think it might be interesting to post a series of the best ones over the next week or two as a study in how much variation lighting and framing can produce without actually changing the subject very much at all. The progression from mid-day light to sunset and beyond is pretty striking. 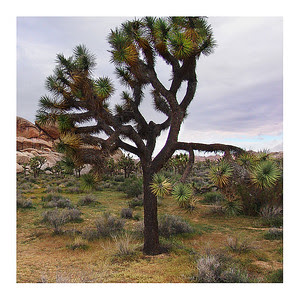 Another rich location that is close to home for me (reasonably at 2 1/2 - 3 hours) is Joshua Tree National Park. About an hour northeast of Palm Springs, it's probably not as well known as some of the other parks around the southwest, but it's a huge (over 500,000 acres), uncrowded area with loads of unique and interesting landscapes.. great for photographers & painters (also campers and rock climbers). It includes 2 different desert climate zones, the Colorado and the Mojave, and you can find an unlimited variety of awesome rock formations, plants, wildflowers and wildlife. You can hike out into the rocks and wander around all day and not see another soul if you don't want to. The Joshua Trees are actually a variety of cactus, but they grow tall with many branches and in large groves; thus the "tree" in the name. The Mojave climate is higher, cooler and wetter so they thrive here. (Look really close almost dead center in this image and you will see 2 people sitting out in the boulders.. I left them in for a sense of scale. The rising moon seems really small due to the wide angle lens).