The Sun Sets on Another Year

Good Bye, '09... and thank you to all the various fellow artists, photographers and general outdoor lovers who stopped by to look in or leave comments in the past year. I have discovered many interesting people from all over the world and seen a lot of great work that I would otherwise never have experienced, if not for starting up this blog just over one year ago.
Sometimes when I sense a nice sunset and I have nothing else pressing to do, I drive over to the beach that is a few minutes from where we live, just to see what might happen. I usually don't bother to take my camera because I see this all the time (especially in the winter months) and there's no real "subject" per se, just the ocean and the sky in their simplicity. I did happen to have a camera a few days ago when I shot this exceptionally nice one, just for fun. It seemed like an appropriate fade out for my last post of the year. Here's hoping for good things to come in 2010.
Check out the fantastic scenes from SkyWatchers all over the world here, and see you all next year!

Whoa.. hardly a thought about the poor old blog in over a week. Been concentrating mostly on holiday stuff and trying to get a new computer up and running while things are kind of quiet, business-wise.
Here is one more interesting formation from Death Valley, showing in more detail the incredible work done by the power of erosion in creating these badlands landscapes. Shot also from Zabriski Point (same as previous post), a couple of minutes after sunrise, which you can probably tell by the light just kissing the tops of the hills. I think this formation has a name, but I don't know what it is:).. will have to research it sometime. If anyone knows, feel free to set me straight!
Posted by Mark Alan Meader at 2:43 PM 8 comments:

In the Twilight Zone 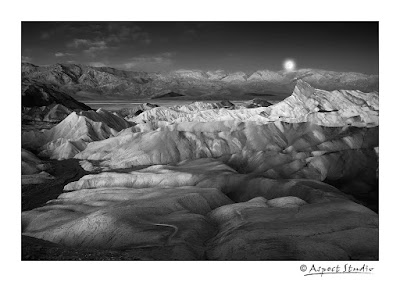 "Moonset-Zabriski Point, Death Valley"
I find fairly often that the most interesting light actually occurs in that strange few minutes just before sunrise or just after sunset. Not so with something like the dunes in my last couple of posts, where the sunlight really is necessary to bring out the shapes and shadows, but for this one I found it disappointing as soon as the sun broke the horizon and got to work on the scene.
This spot is probably one of the most photographed in all the west, (and that's saying a lot)... every day, busloads of tourists stop in the parking lot, hike up a small hill to the lookout and shoot I would guess tens of thousands of snapshots. Almost every serious photographer stops by here too.. for that reason I've avoided it for all the years since I moved to California, but I have to admit that I'm glad I finally gave it a "shot":)
No busses and only one car in the lot when we arrived about a half hour before sunrise... one other photog and his wife beat me and were already set up and working. Of course I knew there was a full moon that night since we had been camping out nearby, but for some reason it didn't occur to me beforehand that the moon could still be part of the composition... until I got up to the hilltop and noticed that it was still sitting on the horizon, just about to disappear. I had to rush down to the "tripod spot" in front of a small wall and set up in a real hurry in order to get at least a few shots in the can before it set behind the Panamint Mountains off to the west, beyond Badwater. If I had a bit more time, I could have set up something with a telephoto and got the moon really big and fat sitting over Manley Beacon (the sharp, tooth-shaped landmark rock), but hey, you can't have everything. Anyway, I think it really made the shot and my day. The pre-dawn twilight turned out to be by far the best for this view, although some other interesting formations that can be photographed from here in the other direction worked quite well after the sunrise, at least for a few minutes.
It looks great in color, too, but I am kind of leaning towards this B&W interpretation. Be sure to click for a full view, the details and textures of the eroded landscape are really fascinating.
Check out lots of great sky shots every Friday at the Sky Watch home page.
In some photographs the essence of light and space dominate; in others, the substance of rock and wood, and the luminous insistence of growing things...It is my intention to present-through the medium of photography-intuitive observations of the natural world which may have meaning to spectators... - Ansel Adams

Here we have a partial section of a larger, eight frame panorama that I shot just as the first rays of morning sun were sweeping across the dunes at Mesquite Flat. It was the night to set the clocks back an hour for the end of Daylight Savings time... and since there was no cell phone signal, I thought it would be safe to use the alarm in my phone to wake up for sunrise without changing anything, but somehow the time got set back during the night even without a signal, so we overslept and had to make a mad dash to get out here before the sun.
What a sight to see the whole scene go from dark and flat to brightly side-lit in just a few seconds, revealing all the amazing wind carved shapes and desert colors. I don't know if I will ever do anything with this as far as printing.. there are quite a few tracks in the sand rather bothering me, beginning just at what is here the left edge and continuing into the next section, but I thought it was at least worth a look. If enough people seem to like it I may take the time to do the necessary touch up in order to make a large print. Cropping out the sky is also an option... sometimes I have to look at these things for a few months before I can make a proper decision. (As usual, some nice clouds would have made my day). Look carefully and you can see another photographer kneeling on the crest of a dune over toward the right side, off in the distance.
Nature does not create works of art. It is we, and the faculty of
interpretation peculiar to the human mind, that see art.
- Man Ray
Posted by Mark Alan Meader at 10:31 PM 8 comments: