Going with the Flow

Last week was 6 straight days of pouring rain here in the mountains of southern California ...a grand total of 11" from Thursday through Wednesday. Although I like snow, I'm kind of glad that this storm was a warm one and we missed out on the white stuff (at least at this elevation)... otherwise it would have been a truly epic snow storm and would have made life pretty difficult around here for a while.
All that rain (and snow on the high peaks) is now flowing down the mountain and making for some really pretty and refreshing scenes along the rivers and creeks that were showing barely a trickle just a couple of weeks ago. It's really fun to explore up here with waterfall after waterfall....  the roar of the water acts like white noise, blocking out the rest of the world so you can really concentrate on your work... you just have to remember to think about where your feet are too, while standing on a rock in the middle of a rushing stream:) You can click for a larger view on this one.
I'm planning to be out in Joshua Tree before the end of this week... (actually I have several more nice ones from my last session out there in October that I haven't even shown yet).  The weather is ever-unpredictable around these parts in the winter, so you really do have to "go with the flow" and be willing to change your plans.
Posted by Mark Alan Meader at 5:54 PM 10 comments:

Skywatch: Monolith Meets Juniper, or The Photographer as a Detective

I was searching for this spot in Joshua Tree for at least the past two years.  I had seen some snaps of it here and there on the web, but no one ever said exactly where it was... and I even asked every park ranger I could find if they knew about it, but no one had a clue!  Back in October when I shot this, I tracked down a geo-tagged picture on Google Earth locating it in what seemed an unlikely area, but it was the best lead that I could find... and when I got there,  there was indeed a trail in the spot indicated, so I gave it a try, hiking a mile out into the middle of nowhere hoping the coordinates were accurate. When it became apparent that it wasn't going to be where it was supposed to be, I was seriously bummed, but determined to get some good work in anyway, since it was just a perfect, soft-light type day for photographing out here.
Later on, while driving through a well known campground to a good spot that I was already familiar with, a distinct shape somehow caught the corner of my eye (and I've driven past the same exact spot many times), up on some rocks above an unoccupied camping spot.  I thought it was pretty unlikely to be here in such a heavily used area, but I did stop and park just to check it out.  Hoorah!.. there it was:)  The standing rock is totally invisible from the road, but I had luckily caught just enough of the tree to make me stop and investigate.
Of course, totally the wrong light at that time, so I went down the road to work for a few hours, knowing that right before sunset was going to be perfect for this scene.  I got so busy over there though, that I ended up having to pack up in a hurry and rush back here to catch the good light, which lasted (as it likes to do) only a few minutes.  Only film gear on hand this day, so I had to fumble as quickly as possible to get a roll into a back and find the right lens/angle (actually kind of hard if you could see the whole situation with bushes and rocks in the way), but managed to get off a whole roll of 20 shots over a period of about 15 minutes.  This is a very wide angle view.. the monolith rock is quite a bit bigger that it appears here due to the wide-angle lens.  I also caught another completely different version, shot in the twilight after sunset that I like a lot, too.
All in all a very satisfactory day, since some shots from earlier also turned out quite nicely.  I'm planning to head back out here again this coming weekend,... we are in another unsettled weather pattern right now, and stormy skies are ideal for shooting in JT.
Tech note: Shot with a Mamiya 6x7 medium format, on Fuji Velvia 100. No filters, (no time:).
Check out the SkyWatch homepage every weekend for more great sky images from all around the world.

Another manzanita bush; but this one ended up a bit "under the weather":)...
Yeah, it can be uncomfortable to get up early in the morning after a snowy night, or stand around trying to frame and shoot while your hands are freezing, but fresh snow is such a great subject for minimal, stark, white-on-white images. Something I've been wanting to work on for a long time, but just wasn't in the right place.  Cloudy days are ideal, so you have more flexibility of time to work... and, color or monochrome seem to work equally well. This shot looked fine in pure monochrome, but I decided to leave it in color for now; I think it feels right with the cold blue cast in the shadows to emphasize the feeling.
This will be the first winter in many years that I am actually living where it snows, so I am hoping to put together a nice, unified folio of winter images this season.
Posted by Mark Alan Meader at 5:46 PM 8 comments: 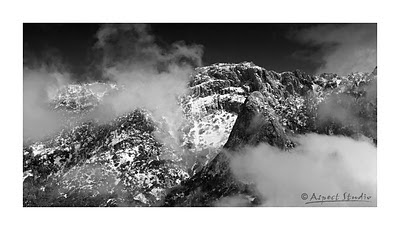 Yes folks, this view is less than one mile from my house.. of course it's not always quite so dramatic as this, which I caught right after a winter storm. (Please click for the detailed view).  This is a section of Tahquiz Peak, one of the lesser peaks on Mt. San Jacinto where we live.  The large, tooth-shaped outcropping in the foreground is known as Lily Rock... it has a 1000' sheer face (on what would be the left side of this view) and is known as one of the best rock climbs in the west. Just a few weeks ago, some climbers had to be rescued from near the top after getting caught in a sudden nasty turn of the weather... they were very lucky that highly skilled people were available and willing to save their butts.  If any of you are into rock climbing, you can read some more about it here.
The main part of Idyllwild sits in a kind of valley out of view at the bottom of this shot... we live about 4 miles past the main village and 1000' higher up in a separate little settlement... and most every day get to drive past several spots where you can see across the valley to these peaks.  Looking in the other direction, we can see almost to the ocean on a clear day.
Check out the SkyWatch homepage every weekend for more great sky images from all around the world.