Another example of an image that takes on a life of it's own only after you get home and start to work with it. Of course, it was intriguing enough at the time for me to set up and frame a few shots... and I pretty much had a black and white result in mind under these conditions, but somehow in real life and later in color on the raw exposure, it just didn't have the drama that came through ultimately. Shot near Desert View at the Grand Canyon a short time after my last one from this location (here), I was busy watching the sky develop minute by minute and searching out interesting foreground subjects to use as a foil for the clouds.
I borrow the term "ghost tree" from a local newspaper writer who sometimes does articles about nature, parks and hiking trails, etc. (maybe she in turn borrowed it from someone:) I love it, since this is a fairly frequent subject for me (as you can see from an older post here) and I've always needed a descriptive tag for these skeletal trees. "God sky" speaks for itself.. I almost expected to see a bolt of lightning crash down from the heavens and this dead tree to burst into flames. Honestly, not a good idea to be standing on the edge of a canyon with a metal tripod if there is lightning about.. (there wasn't in this spot at the time).
As usual, check out all the great SkyWatch images of the week right here.
Our job is to record, each in his own way, this world of light
and shadow and time that will never come again exactly as it is today.
- Edward Abbey

Do you look on the dark side or the bright side? 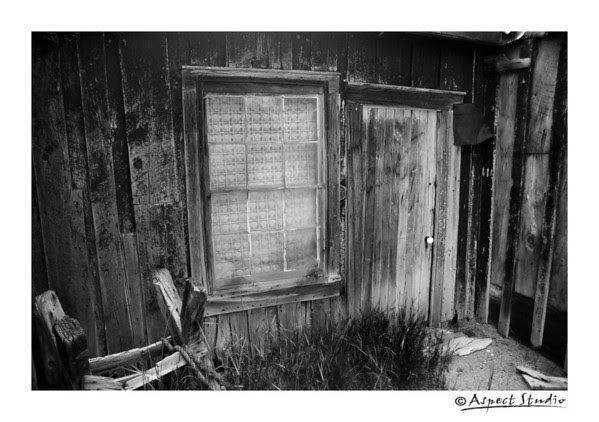 A couple more from the ghost town of Bodie mentioned in my last post. These two in particular I think are good examples of how you can come away with totally different moods/interpretations of essentially the same subject, depending on your own point of view and techniques used. The B&W shot is not quite so dark and decayed in feeling when seen in color, but if you want to emphasize that view, then monochrome seems the way to go. In the color shot, the fresh green grass and the blooming flowers become the subject, creating a whole different attitude where nature can be seen as always moving forward and renewing itself even while the manmade structures slowly return to the earth.
I need to get back to this location and spend at least a whole proper day working (this stop was too brief)... the still-life, detail and landscape possibilities are endless. I'm afraid though with all of California's budget cutting, if they start to close some state parks, this might be one of the first to go, since there was already some talk of closing it for preservation purposes.

Of course, there will always be those who look only at technique, who ask "how," while others of a more curious nature will ask "why." Personally, I have always preferred inspiration to information.
- Man Ray
Posted by Mark Alan Meader at 2:52 PM 14 comments:

Wierd Scenes Inside the Gold Mine

Or in this case, inside the gold mining ghost town, to be exact. (Some of you from the same generation as me will recall that snippet of lyrics from the Doors "The End", which I am listening to right now because it sets the mood perfectly.)
The town of Bodie is found in a desolate high-plains area east of Yosemite and north of Mono Lake, 13 miles down a dirt road from the main highway, almost right on the Nevada border. It began as a small mining camp around 1876 and grew to it's ultimate size of 10,000 people/2000 buildings in 1880. Think of "Deadwood" if you ever watched that HBO series; it once had 65 saloons on Main Street, it's own Chinatown with opium dens and plenty of wild times... the epitome of a lawless wild west boom town. You can feel how hard life must have been here... although at 8400 ft. elevation, this is not the mountains; rather open, grassy hills where the wind howls and deep snow falls in the winter, while the sun beats down relentlessly in the summer. Clint Eastwood's "High Plains Drifter" was filmed just south of here, near Mono Lake.

As the supply of gold dwindled over the years, so did the population, until there were only about 120 residents left in 1920. A fire destroyed much of the town in 1932 and the last of the mines officially closed in 1942. The remaining buildings have been preserved exactly as they were left; stores still have goods on the shelves, some houses have furniture inside, child-size coffins are on display at the undertaker (very creepy), so the overall feeling you get from this place is decidedly ghostly.
Photographically, it's the kind of spot that, ideally, you can get to when the sky is stormy and dramatic, but unless you live in the area or get lucky, you just have to make do. It's also a "gold mine" of textures, tones and untold stories if you concentrate more on the buildings and the interiors. I think it's worth a few posts and I feel like a short break from pure landscape subjects. The small images are clickable for a higher rez view on this post.
There's danger on the edge of town
Ride the kings highway, baby.
Weird scenes inside the gold mine
Ride the highway west, baby.
-Jim Morrison
Posted by Mark Alan Meader at 12:14 PM 10 comments:

These odd formations resemble something Lewis Carroll might have dreamt up, but believe it or not they are quite real and occur naturally in a spot along the Utah/Arizona border known as The Rimrocks or The Rimrock Hoodoos, about midway between Kanab and Lake Powell and just a short hike from the road. Another fine example of the endless wonders that can be found in this area. Some have a white base with a red cap and others are red all the way, but all have the distinctive "mushroom" cap due to uneven erosion in the different densities of rock.
On my first stop here a year before, the wind was blowing so hard that I couldn't even get out of the car because of the sheer force and the blowing blasts of sand that would have ruined my camera if I had decided to try. Those same winds turned out to be the ones that nearly caused all of San Diego to go up in flames, as we discovered while driving home a few days later. So, last year while foliage hunting, I was determined to get back to this spot even though this time rain was the problem, but the weather broke overnight and I was able to catch some soft post-dawn light filtered by the remaining storm clouds. On the drive out here before dawn, I experienced the awesome sight of leftover clouds from the storm literally pouring out of the vermillion cliffs to the north, along the ground and across the road, backlit by the rising sun. Something I was unable to stop and capture photographically then or to describe adequately in words now, but believe me a sight to see, so this will have to do for today.
The idea of wilderness needs no defense, it only needs defenders. -- Edward Abbey
Posted by Mark Alan Meader at 6:12 PM 13 comments:

"Desert View" - Grand Canyon, AZ
For this "SkyWatch", I was perched on the edge of the Grand Canyon, watching and waiting (and hoping) for the sky to develop as it does many summer days around these parts. I won't say a clear blue sky can NEVER work for you, because it can if handled properly, but everything is so much more interesting and dramatic when there is some activity in the sky. It got even better than this in a few minutes, but I'll cover that in a future post:)
This view from the south rim includes the Desert View Watchtower, designed by Mary Colter, architect for the Fred Harvey Company that developed many famous and still popular hotels and buildings around the southwest early last century. Colter's body of work is quite impressive and influential, especially considering that she was a successful female architect in a time when that was almost unheard of. A really interesting (but not too long) article about her history and work can be read here. Or, the super-short version on Wikipedia. As usual, check out all the great SkyWatch images of the week here.
On a side note, I know my posts and visits have been few and far between recently... I have been involved in relocating my entire office/studio, which as you might guess is a lot of work, but at last we're pretty much resettled and I hopefully won't have to devote quite so much of my time to that process anymore, allowing me to get back to some fun stuff.