My mind is kind of occupied tonight with loading up for a photo trip to Death Valley, so this is from the archives... wanted to leave something fresh to look at since I'll be out of touch until next week.
I was planning a fall color shot for today, but while searching for the one I wanted, came across a different image that I've been meaning to post anyway. Not really sure why I like this so much but I do, something about the soft light and contrast of textures; sometimes really simple images can be really satisfying.. we don't always need to think so hard. I shot this several years ago out on some cliffs in the Big Sur area, south of Carmel in central California... well after sunset, one of those "one last shot before heading for the barn" type throwaways that like to pop up fairly frequently. The old "inner eye" strikes again.
Hoping to have some interesting new desert scenery to play with when I get back:) 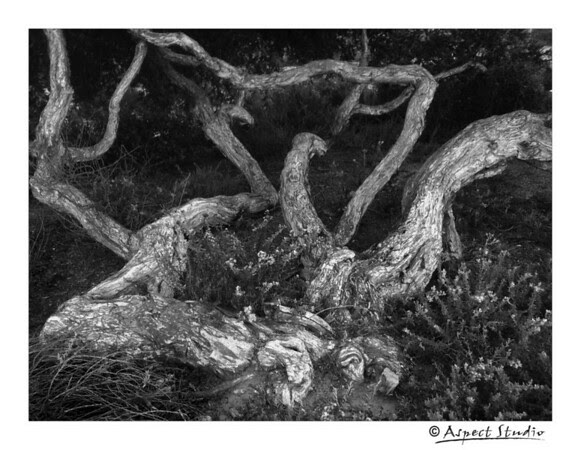 Probably my favorite of this quickly shot set from my iPhone; good enough I think, that I will return and re-shoot the subject with an actual camera next time I am here. Maybe try some different compositions, but the shapes and contrasts are ideal for a nice image. I'm planning to experiment with this in the future as a "sketching" tool or "visual notebook" of sorts, to quickly pre-visualize scenes and subjects, helping to decide which are worth returning to and how to set them up for the actual shot... much as a painter would quite normally do. I often spend a lot of time in a new location just wandering around, composing images in my mind and getting a feel for what I might want to attempt at a better time of day, so this could be really useful, especially if I have a laptop handy to download and play around a bit during mid-day "down time".
Posted by Mark Alan Meader at 5:48 PM 4 comments: 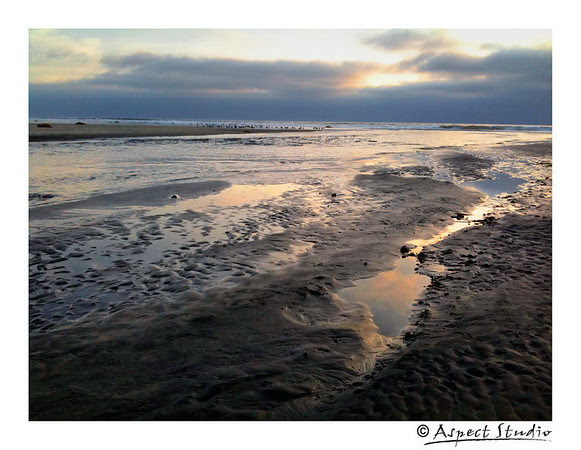 Continuing with my "iPhone Chronicles".. a straightforward scenic for today. (I wouldn't contend that you should expect any very technically challenging work to succeed with such limited equipment, but knowing your limitations and working within them is always necessary no matter what you're doing, isn't it?) ... and it can still work out pretty well.
It's not unusual in this area for the coastal cloud/fog to recede off-shore during the day and slowly work its way back in the late afternoon or early evening. The sinking sun, peeking through an occasional thin spot in the cloud cover, creates a wonderful shimmering light on the waves and beach against the almost black overcast off in the distance. I kind of wish I had been prepared with my "real" gear to shoot this, but like I said, this kind of situation is not so uncommon here, and I'm very lucky to live only a few minutes away.
Posted by Mark Alan Meader at 4:40 PM 8 comments:

Went walking on our favorite stretch of local beach the other evening, armed with nothing but my trusty iPhone. No zoom, no shutter or aperture controls, barely anything like a lens... People often stop by to examine my prints and ask (especially guys) what kind of gear I use; I think I'll freak 'em out from now on and say; "Just my cell phone.":)
I feel a quick series coming on... I could put the results of my experiment all in one post, but I might have a few interesting points to make about each one, so I'll do one per day. First up, a little "seashore triptych"; three still life shots that are similar and complementary. Click for a larger view on this one. Experienced eyes might notice that the resolution was of course limited; I couldn't frame and hang these in any gallery, but in this environment, if I didn't tell you beforehand, would you notice?
Photography has not changed since its origin except in its technical aspects, which for me are not important. - Henri Cartier-Bresson
Posted by Mark Alan Meader at 5:51 PM 13 comments:

Waiting for the Sun (part deux)

So, here is the other half of last week's post. This shot is taken from exactly the same tripod position at the Grand Canyon as my previous one, just 180° opposite. It was obvious that the sun was going to peek through the clouds down at the horizon for just a minute or two.. the question was, if it was going to be too low by that time to light the canyon walls, which is what I was hoping for. If that had not happened as it ultimately did, it would have been a bit of a disappointment since the lighting from the overcast sky was pretty flat and unspectacular. I was reasonably sure about the colorful sky in the other direction, so I had my bets at least partially covered. Must have looked kind of odd swinging back and forth like a madman working both compositions for 2-3 minutes, but by this time there was no one else around, so who cares? The light catching the little tree in the foreground was an unexpected bonus.
As usual, stop by at the SkyWatch home page to see great sky shots from around the world.
In photography there is a reality so subtle that it becomes more real than reality.
- Alfred Stieglitz

Waiting for the Sun and Two for One

"Waiting for the Sun" - Grand Canyon, AZ
This particular day started out lucky; pulling up to the Desert View entrance ranger post and reaching for my ATM card, I was informed that it was a national park "Free Admission Day", so "Thank you, sir" and off to a good start.
After spending the day just wandering around and shooting a few different locations (a couple I've already posted), I decided to head over to the main Canyon Village for a break and an early dinner, leaving plenty of time to find a good location for sunset. My preferred spot was going to be Yaki Point, but the road into there was closed for some reason; if I had been able to scout a likely shot earlier in the day I would probably have hiked it, but without that very specific plan I wasn't willing to spend the time and effort; I settled for searching out this promising little outcropping not far from the main road. The afternoon had developed quite a bit of cloud cover, but it tends to break up as the sun goes down and there was already a pretty steady opening down near the western horizon which was obviously going to light up at some point, so with nearly two hours until sunset, I had plenty of time to line up a shot and settle in on the edge wearing my sweatshirt (after 100° days previously on the trip) and ponder the immense beauty of the canyon.
The key thing with nature photography sometimes just boils down to patience.. you can make do with what nature offers you at any given time, or you can try to anticipate a much better situation that will turn the ordinary into the extraordinary. Here, I had the time to wait... and the reasonable expectation of something worth waiting for, so I determined to stick it out no matter what.
The "2 for 1" part of the story is that I was able to set up two different and distinct shots from the very same tripod position, just 180° apart. This one, directly at the setting sun, the other back towards the east catching the (hopefully) sunlit canyon walls under a stormy sky.. I'll cover that one next week. A very high contrast situation, so 3 bracketed RAW exposures were necessary to capture the entire range, blended together and then processed as normal from there.
Be sure to check out more interesting skys from all over the world at the Skywatch home page.
You only get one sunrise and one sunset a day, and you only get so many days on the planet. A good photographer does the math and doesn't waste either.
- Galen Rowell

What?... Fall Colors Without Color?

Aspen Trees - Southern Utah
Sure, the leaves were very pretty shades of gold and yellow, but the light at the time was kind of flat and try as I might, I couldn't get any shots from this location to pop as I would like in color, so why not reconsider conventional wisdom and try it in black & white? Aspens seem to be one of those subjects that look great either way... and I am much happier with this now than I ever was with it in color. The thin vertical lines of the trunks and the delicate leaves always give a watercolor painting-like feel that I never get tired of, especially if you can get them against a dark background. Luckily that happens a lot in Utah where the groves tend to line open meadows against the darker evergreens of the forest. I found it interesting when analyzing this scene that I could crop it to almost any section, size or proportion and still end up with a pretty decent composition, so I guess in reality it's a kind of texture study.
Shot one year ago to the day, I came back to this because I'm deciding if I will go foliage hunting this year and where.. it will be more towards the end of the month or into November if I do. And yes, the colors were indeed fantastic.. I will post some color images too:)
"Simply look with perceptive eyes at the world about you, and trust to your
own reactions and convictions. Ask yourself: "Does this subject move me to feel, think and dream? Can I visualize a print - my own personal statement of what I feel and want to convey - from the subject before me?"
- Ansel Adams
Posted by Mark Alan Meader at 5:50 PM 18 comments: